SORLA is a multi-domain transmembrane protein that is expressed in both neurons, and glial (microglia, astrocytes) cell types. Originally identified in a screen for blood biomarkers for Alzheimer's, SORLA expression is potentially suppressed in Alzheimer's patients. SORLA variants have been described to be enriched in Alzheimer's by various groups, and has been described by our work and others to suppress APP processing to Abeta in neurons.

We are currently exploring various aspects of SORLA function:
1) Whether and how SORLA protects neurons downstream of Alzheimer's stress
2) What function(s) does SORLA have in microglia, and how do Alzheimer's mutations affect this (more on this in the movie below)?
3) What is the relationship between SORLA and other Alzheimer's risk genes?
​ 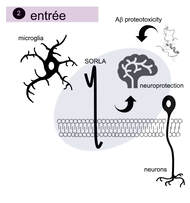