The endosome is a cellular compartment required for sorting and trafficking various transmembrane proteins between the cell surface, lysosome, and other subcellular organelles. Endosomal enlargement is a pathological feature which occurs early in Alzheimer's, which suggests that defects in endosomal sorting machinery may contribute to Alzheimer's onset. Previous studies demonstrate that components of the endosomal "retromer" complex consisting of a core VPS26-VPS29-VPS35 heterotrimer, is downregulated in Alzheimer's. Selection of cargo through the retromer complex is thought to require SNX27, which consists of an N-terminal PDZ domain which binds to endosomal cargo.

Our work demonstrates that SNX27 binds SORLA, a gene previously implicated in Alzheimer's risk which enhances cell-surface "recycling" of the beta-amyloid precursor protein (APP) to the cell surface, which diverts APP cleavage to beta-amyloid at acidified endosomes. Other groups demonstrate that APP is also trafficked to the Golgi by SORLA, and it is likely that these two activities together enable SORLA to reduce beta-amyloid generation. 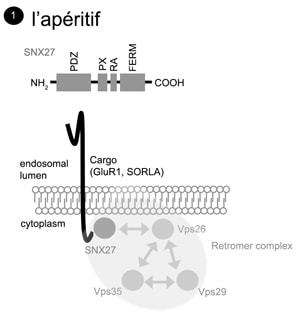